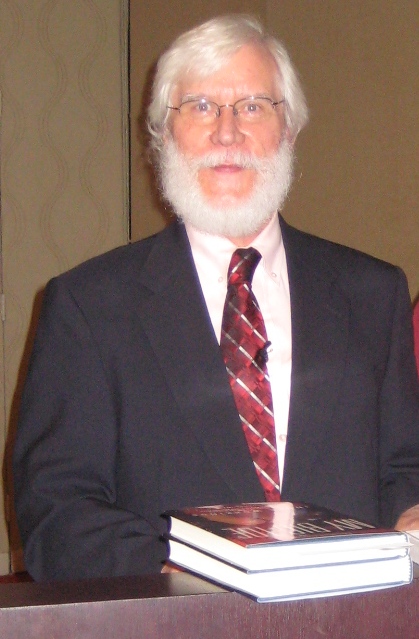 Tom Campbell began researching altered states of consciousness with Bob Monroe (Journeys Out Of The Body, Far Journeys, and The Ultimate Journey) at Monroe Laboratories in the early 1970s where he and a few others were instrumental in getting Monroe’s laboratory for the study of consciousness up and running. These early drug-free consciousness pioneers helped design experiments, developed the technology for creating specific altered states, and were the main subjects of study (guinea pigs) all at the same time. Campbell has been experimenting with, and exploring the subjective and objective mind ever since. For the past thirty years, Campbell has been focused on scientifically exploring the properties, boundaries, and abilities of consciousness.

During that same time period, he has excelled as a working scientist, a professional physicist dedicated to pushing back the frontiers of cutting edge technology, large-system simulation, technology development and integration, and complex system vulnerability and risk analysis. Presently, and for the past 20 years, he has been at the heart of developing US missile defense systems.

Tom is the “TC (physicist)” described in Bob Monroe’s second book Far Journeys and has been a serious explorer of the frontiers of reality, mind, consciousness, and psychic phenomena since the early 1970s. My Big TOE is a model of existence and reality that is based directly on Campbell’s scientific research and first hand experience. It represents the results and conclusions of thirty years of careful scientific exploration of the boundaries and contents of reality from both the physical and metaphysical viewpoints. The author has made every effort to approach his explorations without bias or preconceived notions. There is no belief system, dogma, creed, or unusual assumptions at the root of My Big TOE.

By demanding high quality repeatable, empirical, evidential data to separate what’s real (exists independently and externally) from what’s imaginary or illusory, Campbell has scientifically derived this general model of reality.
Synopsis of the My Big TOE Trilogy
My Big TOE, written by a nuclear physicist in the language of contemporary Western culture, unifies science and philosophy, physics and metaphysics, mind and matter, purpose and meaning, the normal and the paranormal. The entirety of human experience (mind, body, and spirit) including both our objective and subjective worlds, are brought together under one seamless scientific understanding.
If you have a logical, open, and inquisitive mind – an attitude of scientific pragmatism that appreciates the elegance of fundamental truth and the thrill of breakthrough – you will enjoy this journey of personal and scientific discovery.
Based upon careful scientific research and logical deduction, this is a book for all who have an interest in the nature of the reality in which they exist. My Big TOE is not only about scientific theory, function, process, and discovery – but also speaks to each individual reader about their innate capabilities. Readers will learn to appreciate that their human potential stretches far beyond the limitations of the physical universe.
This trilogy delivers the next major scientific conceptual breakthrough since relativity and quantum mechanics raised scientific eyebrows in the first half of the twentieth century. No catch, no megalomania, no hypothetical wackiness, no goofy beliefs, no unusual assumptions – just straightforward science that better describes the totality of our experience and provides a wealth of practical results and new understanding that can be applied personally and professionally by scientists and nonscientists alike. This is the real thing.
My Big TOE is about life, purpose, personal significance, physics, evolution, and the reason why. The acronym “TOE” is a standard term in the physics community that stands for “Theory Of Everything.” Such a theory has been the “Holy Grail” of physicists for more than fifty years. My Big TOE delivers the solution to that scientific quest at the layman’s level with precision and clarity. This book is an adventure into the overlapping worlds of science, philosophy, and metaphysics. It is tightly analytical and logical as all good works of science and philosophy should be, while at the same time down to earth, easily understandable, and full of good humor. No leaps of faith or beliefs of any sort are required to get to where these books will take you.
Campbell did not put the “My” in My Big TOE to flaunt pride of authorship. Nor does the “My” indicate any lack of generality or applicability to others. The “My” was added to be a constant reminder to you that this reality model cannot serve as your personal Big TOE until it is based upon your personal experience. On the other hand, personal or subjective experience is only one piece of the reality puzzle. In the objective physical world of traditional science, My Big TOE delivers a comprehensive model of reality that subsumes modern science, describes our objective material reality, and is universally applicable. Contemporary physics is shown to be a special case of a more general set of basic principles.