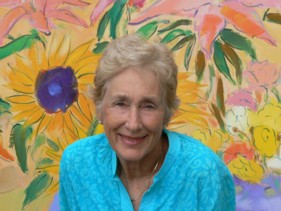 “If you wait to be happy, you will wait forever. If you are happy now, you will be happy forever.” – Sally Huss

Sally Huss has been an artist all of her life. She was raised in Bakersfield, California where she took her first private oil painting lessons at the age of 10. She studied art at Occidental College, eventually graduating from the University of Southern California with a degree in Fine Arts.

At the same time Sally (Sally Moore) was developing her art skills, she was developing her tennis skills. She became National Junior Champion, a member of the U.S. Wightman Cup Team and a Wimbledon semi-finalist. As an accomplished tennis player Sally taught her special brand of Zen tennis to celebrity clients such as Barbara Streisand, Joel Grey, Jill St. John, Larry Hagman and Jack Jones among others. After playing the Virginia Slims Women’s Tennis Tour against such professionals as Martina Navratilova and Chris Evert Sally became the head rackets pro at The Aspen Club in Colorado. There she hosted visiting celebrities, including Clint Eastwood, Merv Griffin, Ingamar Johansson and Rod Laver.

In the 1980’s with the help of her husband Marv, former head of advertising and promotion for Hallmark Cards, Sally returned to art and writing in a big way. With her own products – gift art and original paintings — she branched out into licensing her designs for greeting cards for American, lines of wallpaper, ceramics, mugs and T-shirts. Now, her art dances across thousands of products including signature lines of clothing, purses, children’s books and even baby bibs. Her painting and gift art brighten walls and uplift hearts in homes, office buildings and hotels. One piece even graced the walls of The White House – a special commission for Hillary Clinton entitled “A Happy Child” for her 50th birthday celebration.

Today Sally Huss is considered one of the leading artists/designers in the country, in many cases combining her writing talents with her art. This has resulted in publishing a number of books for children and THE HAPPY BOOK for Ten Speed Press. This combination of artistic talents has also taken her into national newspaper syndication by King Features for her illustrated panel of happy thoughts called Happy Musings, now appearing in such papers as The Detroit Free Press, The Orange County Register, The Desert Sun and others.

Sally is founder of Sally Huss, Inc., a 20 year-old California corporation, encompassing licensing, merchandising activities and syndication through King Features.
For years as a speaker to women’s business and social groups, sports associations, and charity gatherings Sally has shared her happy and inspirational message. Positive, fun and enlightening, her words empower and inspire those who hear her.

WHAT’S THE WORD ON SALLY?

“Most people think that success leads to happiness when it really is that happiness leads to success.” That’s the message that Sally Huss carries with her wherever she and her art may find themselves. As a professional motivational speaker, Huss spreads “happiness” through her speeches as well as her everyday dealings with people.

Yet, according to Huss, who designed Seabrook Wallpaper Company’s Happy Art Collection, “Happiness is an elusive thing.” And, even she struggled to find it earlier in her life. When she was just 10 years old, Huss then Sally Moore, and her dad decided that she would be the tennis champion of the world. True happiness seemed to be on the horizon as Huss became the number one player in Southern California at age 13 in her division; the number one player in the United States at age 15 and the number one junior player in the world at the age 18. Then at 19, she was a semi-finalist in the women’s division at Wimbledon. The next year, in a second attempt to win Wimbledon, she lost her first round match as her mom and dad watched. “It felt like someone died,” said Huss. “I decided that being number one in tennis was a useless goal. That I couldn’t be champion forever, which meant I couldn’t be happy forever. So at 20 I quit.”

Huss then finished studying fine arts in college, worked in the movie and television business, and even ran Paul Simon’s Music Publishing Company while playing tennis socially and enjoying painting. It was during this time that she discovered that you must “be happy doing whatever you’re doing.” That revelation was brought to light through the elephant story told to her by a very wise woman. In that story, an elephant carries a young girl across mountains, valleys and deserts until they come to a wise and peaceful man who the girl asks to tell her the most important thing to know. The answer, as Huss has translated in her speeches and many forms of her art: “If you wait to be happy, you will wait forever. If you are happy now, you will be happy forever.”

With a whole new outlook, Huss returned to tennis at the age of 28. Now with a non-competitive attitude, she joined the competitive atmosphere of the Pacific Northwest Tour and consistently won again and again. Interestingly, Huss credits her wins to more than just being a good player. She claims that she had an attitude advantage – the other players were intimidated by Huss’ desire to have fun, to be happy, as she played.

Today, Huss finds and spreads happiness through her art, her writings and her speaking presentations.

As you walk up the garden path to Sally Huss’ home, you immediately feel serenity and peace. The yard is studded with roses and the entrance, a large Dutch door painted glossy white, leads you to a stunning view of the Pacific Ocean. With the fragrance of flowers and the soft tinkling of wind chimes filling the air, it seems that, if happiness could be captured it would be in this place.

It makes sense that this is Sally’s home. The artist makes it her life’s work to not just study happiness, but to get it down on canvas and in words. Her bright, vivid paintings and her book on happiness are simple, but never simplistic, love letters to personal transformation.

According to Sally, happiness is not just a vague concept – it is a real goal that everyone can and should cultivate. “A happy person makes for a happy family, a happy family makes for a happy community, and a happy community makes a better world,” she says. By following this reasoning each member of a family can contribute not only to her own home’s happiness and joy, but to society at large.

In her cheerful volume, THE HAPPY BOOK (Ten Speed Press), a compilation of exercises in positive thinking, Sally shows how to work towards happiness daily. This brightly illustrated book is a tool individuals and families have found so useful that it has spread into classrooms across the country too.

Painter Sally Huss’ life has had many different textures and colors as do the whimsical and vibrant paintings she has in galleries. Huss has earned a bachelor’s degree in Fine Arts, worked as an art director and researcher in Hollywood films for Samuel Goldwyn, Jr., assisted Ralph Story (Ralph Story’s Los Angeles television series), and ran musician Paul Simon’s music publishing company. At one time Huss and her entrepreneurial husband decided to break out on their own and the results were an astounding 22 Sally Huss Galleries through the U.S. They now are totally focused on their Web site, www.sallyhuss.com and spreading happiness through her speaking engagements.

Judging from her zeal for experience and imaginative art, it is clear that Huss feels that life is indeed wonderful! “Life works wonders for those who think life is wonderful!”

Sally Moore Huss – and Artist Both on and off the Court

Sally Moore Huss began her tennis career at age 10 in Bakersfield, California. Her father, Laurren Moore, a fine athlete, took Sally to Lake Lovelace (Mr. Tennis in Bakersfield) for her beginning lessons. Sally soon showed real promise and her father brought her to the Los Angeles Tennis Club to be coached by George Toley, renown coach of the many-time NCAA Champions of the University of Southern California. Under his tutelage Sally played all of the Southern California junior tournaments and climaxed her junior career by winning the National 18 singles in 1958 in Philadelphia, the Wimbledon Junior Championships in the same year and was voted the Best Junior Ever for the decade.

In 1958 Sally entered Occidental College in Eagle Rock, California to pursue a major in Fine Arts. She was able to devote time to both her “loves” – tennis during the summer and art during the school year. When school ended that year Sally was off to play European and Eastern U.S. Circuits. She became a U.S. Clay Court Champion and was twice a member of the U.S. Wightman Cup Team. In 1959, she reached the semi-finals at Wimbledon losing to Maria Bueno, the eventual winner.

After three years at Occidental, Sally left school to play the Caribbean Circuit. Upon completion of this tour Sally felt that tennis was beginning to have less and less meaning for her and so at age 20, she propelled herself on to new challenges. Sally entered USC and began to work on writing children’s books. She acted as an assistant to Samuel Goldwyn, Jr., working with his art director, finding locations for films.

The next few years found Sally in a variety of fields. She worked at UCLA in the Educational Psychology Department doing illustrations for children’s reading programs and then with an ad agency in their educational films department. And, after working with Ralph Story as an assistant in promotional films, Sally ran a music publishing company for Paul Simon.

While working for Simon, Sally had the opportunity to study dance and movement as therapy. She was able to apply this theory of moving freely to tennis and it improved her game tremendously. She wrote and published a book: HOW TO PLAY POWER TENNIS WITH EASE with Harcourt Brace demonstrating her relaxed method of play. She then returned to tennis, teaching such celebrities as Merv Griffin, Joel Grey, Jill St. John and Barbra Streisand in Malibu and Brentwood.

In 1974 Sally returned to tournament competition, playing the Northwest Tour. In 1975 Sally was ranked 30th in WTA.

By then Sally had met her husband to be, Marvin Huss and was ready to settle down. They married, developed and ran The Aspen Club in Aspen, Colorado. After their son, Michael, was born they yearned for the warmer weather of California.

In 1984 Sally started entering senior tennis tournaments as a competitor. She lost only two singles matches all year and culminated the year by winning the National Women’s 40’s singles and doubles championships and the Southern California Grand Prix Women’s 35’s and 40’s singles. In 1985 traveled to Europe as a representative on the U.S. Young Cup Team.

Sally credits her father for giving her the initial support and direction needed for her tennis success. Now, her husband Marvin is a source of support – but the real credit goes to Sally, respected and admired as a wonderful, honest competitor and a bright woman of many talents.

As a song Bob Carlisle’s “Butterfly Kisses” topped the Billboard charts and became an anthem everywhere for the special love that exists between a daddy and his girl.