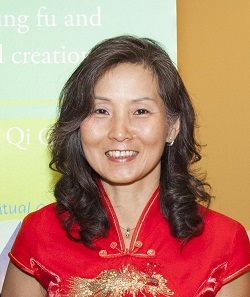 She offers classes and certification programs:

Over 65 videos on Youtube including national Olympic athlete and professionals:

There is a Chinese man, Li Ching-Yuen, who claimed he was at the age of 197 before his death in 1933. Newspapers around the world reported the news of his passing, which included the new York Times on May 6, 1933. Official government records recorded his birth year as 1677, making him 256 years old at the time of his passing. One of the secrets to Li’s claimed longevity was the fact that he was a herbalist, martial artist and a Qi Gong practitioner.

What is Qi Gong?

Qi Gong is a 5,000 years old Chinese art of self-healing, breathing exercises which involved simple movements with visualization. Tai Chi, traditional Chinese medicines, acupuncture, and reflexology are different ways of moving one’s Qi. Oprah and Dr. Oz referred to Qi Gong as the most powerful longevity exercise since it focuses on healing the `roots` to a health problem. Qi Gong is also referred to as acupuncture without the needles.