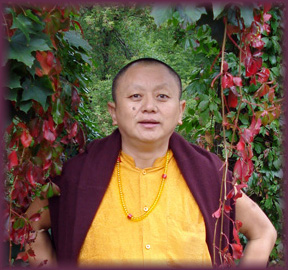 Kündröl Rinpoche is the seventh incarnation of the great Kundröl Jatson Nyingpo of Tibet. Kundröl Jatson Nyingpo was a great tertön (revealer of hidden treasures) and founder of the great seat of learning Mongyal Monastery in Tibet. Since the birth of the first Kundröl Rinpoche in A.D. 1700, reincarnations of the rinpoche (“precious one”) have appeared successively thereafter to uphold the wheel of the compassionate teachings of Bön for the benefit of all sentient beings.
The life of Kündröl Drakpa

According to Shardza Rinpoche (White Lotus, p. 88 et seq.), Kündröl Drakpa was the main disciple (as far as the A-khrid lineage is concerned) of Geshe Yungdrung Tenzin. He was born in 1700 (lcags ‘brug) in the area of Dreshö Golam, and belonged to the Mutsha Ga clan. His father was called Möngyel Drungmu Wer (Zhangzhung for Yungdrung Gyelpo) and his mother, Tagza Tsering Tso. His birthplace was actually in Khyungpo.

Until he was four years old (sometime around 1703/4), Kündröl did not utter a word, but when he once saw a yogi standing on a stone behind the door of his house, he was so frightened by the countenance of the personage that he straightaway went back inside, saying, “There is an old man at our door! Go and have a look!” His parents went to see, but nobody was standing at the door. It was believed that the man may have been the ancient master Tongyung Thuchen of the Zhangzhung kingdom, who lived centuries before, in the Yarlung dynasty. On another occasion, when he was five, Kündröl was reprimanded by his father because he kept playing with a group of other children. Kündröl replied, “Father, if my body delights in playing with other children, my mind, being the Absolute Body (bon sku), remains immutable (‘gyur ba med)!” Everyone present was astonished by the child’s precocious intelligence.

Up to that time, his family had lived in Kongpo, but they decided to move back to their native land. On the day of their departure, Kündröl spontaneously sang a song of realization after giving initiation to the local people of the village. Surprisingly, he began to learn to read and write only at the age of nine (in 1708, according to our way of counting years), but he mastered both skills without effort and seemed naturally to know how to read and write through just having them demonstrated to him.

Then, when he grew up (no clear date is given, apart from the information that he was an adult), Kündröl met Geshe Yungdrung Tenzin (the preceding main patriarch of the A-khrid lineage), who gave him the name Namkha Yeshe. It seems he did not use this name to sign any of his works (at least those available to me at the time of writing this summary). By this master, Kündröl was instructed in all exoteric and esoteric teachings of Bön, and he received all kinds of initiations (dbang), ritual readings (lung), and precepts (man ngag). He especially received rdzogs chen instructions from Yungdrung Tenzin, and was thus directly introduced to the natural state (gnas lugs) of his mind.

At that time, realization (rtogs) and liberation (grol) coincided, and all of Kündröl’s obscurations were instantaneously cleared away without having to be purified. He reached such a state of stabilization of the natural state that he achieved the ten stages (sa bcu) of the Path without having to traverse them gradually. In fact, he had actualized pure and manifest buddhahood without having to engage in hard and time-consuming practices. He thus perfected all the qualities (yon tan) of the stages (sa) and paths (lam) without doing so purposely. He was then able to integrate into his enlightened mind scriptures he had not even previously studied.

Later, Kündröl moved to Central Tibet and Tsang, where he met His Holiness (sku mdun) Rinchen Özer, the then abbot of sMan ri, from whom he took full monastic vows and received the name of Gyelwa Özer. He regarded the abbot as a true Awareness Holder (rig pa ‘dzin pa) and a holy man faithful to his three vows (sûtra, tantra, and rdzogs chen). During his stay in Central Tibet, Kündröl took the opportunity to study the lineages of the five great Bon clans, that is, the Dru, Zhu, Pa, Me’u, and Shen. In these traditions, he was taught exoteric and esoteric teachings and he fully listened to their ritual readings (lung) while he also received all their initiations (dbang).

Kündröl then traveled to Tö, where he labored extensively for the sake of sentient beings. After that, he returned to his own country (that is, Kongpo). There, as he was engaged in his yidam practice, wonderful signs of accomplishment occurred, such as the water of the vase offering spontaneously boiling, sparks bursting forth when he was beating his drum, direct visions of the yidam’s face, etc. Similar inner signs occurred as he was practicing the channels and winds (rtsa rlung) yogic exercises, which enabled him to remain in his hermitage with little food for sustenance. Then, wherever he moved, he summoned the local deities and exhorted them to indulge in virtuous actions; he also traveled as far as the border lands of southern Kongpo, where he converted the “uncivilized” (mtha’ khob) populations and exhorted them to practice virtue. His activities also involved subduing the eight classes (sde brgyad) of arrogant spirits and binding them under oath. He worked extensively for the spread of Bön and built several monasteries, while he also took part in the restoration of some damaged sanctuaries.

His passing away (no date or indication of his age are given), an actual sign of the everlasting truth of impermanence and his ultimate teaching to his disciples, was accompanied by various miraculous signs, such as rainbows filling the sky, rains of flowers, etc.

Kündröl had disciples from all regions of Dokham who mastered contemplation, wind-mind (rlung sems) control, dissipation of dualistic apprehensions, etc. Among the most important mentioned are Mushen Künga Phüntsok, Trokhyung Namkha Wangden, Trotsang Tenzin Norbu, Ratön Yungdrung Gyurme, and Tokden Yeshe Tenzin. The last-mentioned was to be his successor in the line of transmission of the A-khrid lineage; he was also known by his toponymic name, Tromdzong Yeshe Tenzin, his Tokden title being the usual one given to patriarchs of the A-khrid lineage.
The above is an edited extract from Achard, Jean-Luc, “Kun grol grags pa and the Revelation of the Secret Treasury of the Sky Dancers on Channels and Winds: An inquiry into the development of the New Bon tradition in 18th century Tibet,” The Tibet Journal, vol. XXX, no. 3, Autumn 2005, pp. 3:32.