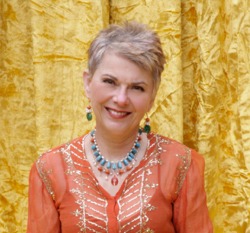 For Helen Goldstein, the yoga craze which began with the baby boomers in the 1970s became a lifelong passion. Goldstein was once a successful Toronto real estate agent, but lost interest as she started pursuing yoga “with a vengeance”. She studied at the famous Kripalu Centre in Massachusetts, where she was told by the guru that she should become a yoga teacher. Helen created the “The Yoga Studio”, in 1995 which quickly became the go to studio in Toronto and the largest one in Canada. She has been championing the positive nature of yoga ever since, and has been a key figure in the rise of yoga`s popularity in Canada. In fact Toronto Life Magazine called her the “god mother” of yoga in Toronto.

In 1996, Helen had the honour of being personally certified by Dr Deepak Chopra to teach his Primordial Sound Meditation technique and has taught hundreds of people in Canada and the U.S.

As the popularity of yoga has increased, Goldstein has evolved with it, incorporating corporate wellness (yoga and meditation at your desk) as well as yoga for air travellers into her repertoire. She wrote a monthly column for Air Canada’s inflight magazine on airplane yoga. A popular and highly respected key note speaker, she had the honour in 2008 of being a key presenter during Shanghai Yoga Week. Helen has been featured in almost every Canadian magazine as well as WallPaper and W Magazine, and most of the major television stations as well as radio.. She has shared her knowledge by writing a weekly column in Metro News, the largest readership in Canada.

Following the sale of “The Yoga Studio” in 2007, Goldstein has continued to thrive with much of her attention now being put towards her new business, a monthly social get-together intriguingly titled “Buddha Groove Toronto”— parties for eco-friendly kindred spirits to make new business or personal friends. The parties typically attract interested and interesting people who love to dance, mingle and connect.

Most recently Helen has been selected as one of the “faces of the new economy” by the Centre for Social Innovation and her photo has toured Canada..

Our Show on Nov 5th was about her newest project Workplace Wellness Online Training. Unfortunately, we had some problems due to Hurricane Sandy and CBS’s home office being in New York, so there is only half of her interview here. However, we will be doing another interview in the new year, once her course is live.