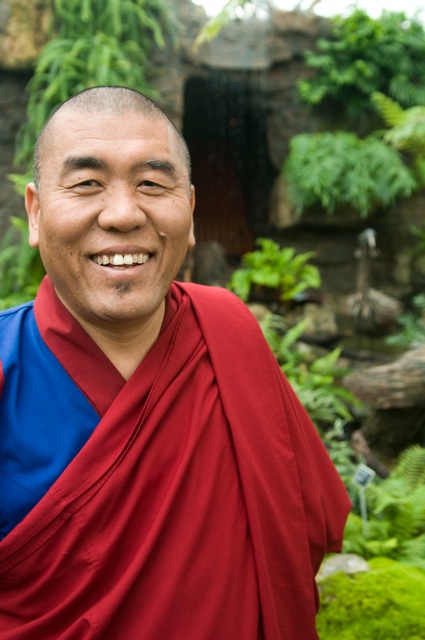 Geshe Nyima Dakpa Rinpoche is the author of Opening the Door to Bön. An excellent practical and explicit instruction book for Westerners that details the outer and inner fundamental Bön practices. Bön, is the ancient pre-Buddhist religion of Tibet, is still practiced today, with a rapidly growing number of readers interested in the shamanism and magic that are part of its complete path to liberation. He is a Geshe, which is equivilant to a Phd. One of a small number of Tibetan Bön geshes living in exile, that are establishing centres internationally in an effort to share and preserve this ancient and indiginous religion and culture.

Nyima Dakpa Rinpoche is the Abbot and lineage holder of the Lha Tri Monastery in Kham/Dege, Eastern Tibet. His father was the third reincarnation of Tsultrim Phuntsok, a great Bön practitioner of Eastern Tibet. He grew up in Dorbatan, Nepal and received his first instruction from his father and from Tsultrim Nyima Rinpoche, the Abbot and founder of the Dorbatan Monastery. He studied under the guidance of H.E. Yongzin Tenzin Namdak Rinpoche and grew up under the care and guidance of H.H., the 33rd sMenri Trizin and spiritual head of Bön.
In 1978 he joined the first graduating class of the sMenri Bön Dialectic School in Dolanji where he completed his studies and received his Geshe degree in 1987. Rinpoche was the founder and chief editor of “Bön sGo”, then the only magazine of Bön first published in 1988 with approval and blessings from H.H. the 33rd sMenri Trizin and H.E. YongZin Rinpoche. He served as chief editor until 2003.

Nyima Dakpa Rinpoche now teaches and travels internationally to spread the wisdom of the Bön teaching and raise funds for the support of the Bön children. He is the spiritual head and founder of several international centers: Bon Shen Foundation in Minneapolis, MN; Yeru Bön center in Los Angeles, CA, Shen Ten Ling Bön Center in Vienna, Shen Chen Ling in Minsk, Belarususs and Gyerpung Drubdhe in Ukraine, and Sharza Ling in Poland.